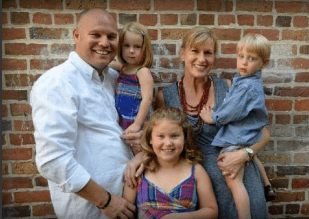 After Lisa Allyn and her husband, Matt, had tried unsuccessfully to have a second biological child, she began to think about adoption. Matt, however, was not quite ready.

One day, Lisa saw a sweet-faced, blue-eyed little girl from halfway across the world named “Anika” whose picture was posted by a friend on Facebook. With her heart jumping, she brought up the possibility of adoption again. And, again, he was not ready. She struggled with why the Lord would put adoption so heavily on heart, but not on her husband’s, but she waited.

A couple of weeks later, Matt came home and said they should pursue this little girl. They hurried to find out about next steps but were told that another family had already filed paperwork to adopt her. Left wondering what to do next, the couple prayed and decided to adopt internationally from Poland. From that point, the Lord led this family through ups and downs that revealed His will for their family. Lisa put their story together recently and shared it with us!

“I remember speaking to Jana at Lifeline for the first time as I was driving to work. She told me Poland was a fantastic country to work with, but the chance of us receiving a referral from there would be slim as most of the children from Poland are sibling sets and would be older than our 3 year old daughter. She asked us to consider Hungary. After learning more about the country, we decided to file our dossier in Hungary. We waited for a referral. And waited. And waited.

While waiting, we were preparing our home and hearts. We decided to attend a national adoption conference in October of 2013. It was a wonderful weekend and while on the way home, we both discovered we were feeling that we should consider a domestic adoption instead. Neither of us understood why we felt the Lord leading this way but we were open it.”

They Allyns were surprised, though, when a friend from their church approached them the following week. She knew of a young lady who was pregnant and looking for a family to adopt her child.

After the Allyns communicated with this mother, she chose them to be the family for her little boy. They put their international adoption process on hold and began preparing for a new baby, who would be born in July 2014. Unfortunately, the birth mother changed her mind about which family she chose for her son, and the Allyns were deeply hurt by deceptive circumstances. Although they were angry and confused, they forgave those who had hurt them and reminded themselves that God was in complete control.

Lisa called Jana again and told her they were ready to reopen their file.

“On October 15, 2014, my phone rang as I was running on the treadmill. I let it go to voicemail. It was Jana calling. She had some information for us that she wanted to talk about. Jana calling us was not unusual during any given week, but this time it seemed different. And it was. She had a referral! A little 14 month old girl . . . from Poland! Excitement filled my heart! She was emailing us the girl’s information along with a couple pictures. She wanted us to read it over, pray about it and get back to her in a couple days.

And there she was. A sweet faced, blue-eyed, blondie on the other side of the world waiting for a family. I can clearly remember looking at her picture for the first time, tearing up and thinking, ‘I think that is my daughter.’ We accepted her referral and started the process of getting our paperwork filed with Poland since everything had been completed for Hungary. It took a couple months but eventually it all arrived and we found ourselves waiting once again. This time, though, it was for the judge to issue a bonding date so we could travel to meet her! We waited . . . and waited . . . and waited.

That waiting brought us to March 19, 2015. This time, Matt got the call from Jana. She received word from Poland that our daughter, who we were waiting to adopt, had a younger brother and they would like to know if we would consider adopting him as well. This was a younger brother . . . a little boy born one month before the domestic baby that we were to adopt was born. Wow! God was preparing us all along! It didn’t take much consideration. We had already been approved by the United States government to adopt 2 children.

We traveled in August of 2015 and met both of our children in their foster homes—on my birthday. Due to a number of reasons, both adoptions could not be completed during the same trip to Poland in 2015. We brought our sweet little Agata home on October 3, 2015, and our son, Aurek, home on August 7, 2016.”

The Allyns have witnessed first-hand God’s plans for the good of His children. They sum up their story by proclaiming the goodness of God’s plan, even when they could not understand what was happening around them.

“Even when our world seemed to be uncertain, confusing and disappointing, God had the BEST plan already laid before us. It was just a matter of us trusting in Him and waiting on His timing.”

Do you feel called to adoption? Would you like to just learn more about the process? We would love to talk to you no matter where you are in the process! Call us at (205)967-0811 or visit our adoption page to learn more!

*This article will also be appearing in our Journey Alumni magazine.