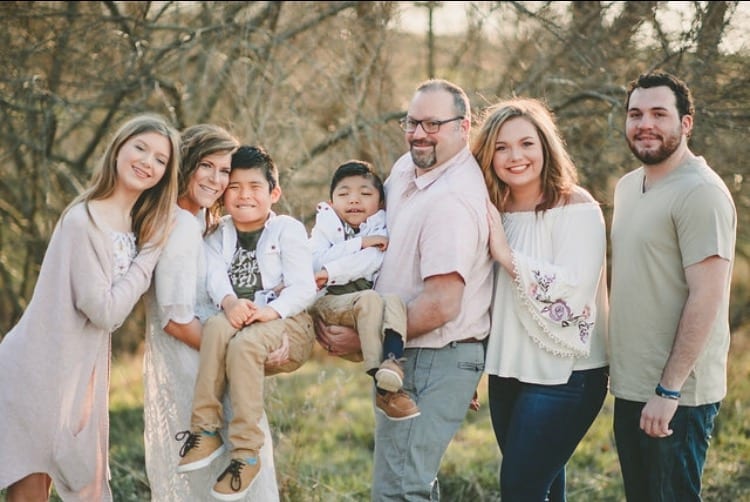 This is the first of a three part series on the different aspects of love we often see in adoption.

On a warm July morning in Hong Kong, a man rode his bicycle along the highway. He heard a noise from the side of the road. He quickly left his bike to investigate and was shocked by what he found: a nine-month old baby, wrapped in a blanket, abandoned amongst trash, where stray dogs come to eat.

On the other side of the world, Troy and Jocelyn Piper were struggling with disappointment. The parents of three knew God had called them to adopt, and they’d been hopeful that He had answered their prayers through a four-month-old with muscular dystrophy who needed a home. God had recently given them a burden for children with special needs, and they thought this was the child God had for them.

The birth mother chose another family.

Heartbroken, yet more sure of their calling than ever, they prayed the Lord would lead them to their child. They soon learned about the need for forever families for special needs orphans in Hong Kong. After much prayer, they began the application process and were introduced to a two-year-old little boy with quadriplegic cerebral palsy and visual impairment–the same little boy who had been found on the side of the road. Troy and Jocelyn prayed. They knew the risks of bringing home a child with such severe needs, but they weren’t afraid. They knew he was their son.

In the months leading up to meeting Nolan, Jocelyn prayed that the Lord would help Nolan understand what was about to happen. Although he was three years old at this point, cognitively, he was infant-like, so he wouldn’t be able to process the change that was coming. “I prayed day and night that in his heart, he would know that he was ours,” Jocelyn says.

On July 5, 2015, they held Nolan in their arms for the very first time. And in an answer to prayer, he held onto their hands, and his face lit up with a smile that said, “I know.”

Throughout the adoption process, when the Pipers received updates from the orphanage about Nolan, another boy was often in the pictures. The reports mentioned this boy who called Nolan “little brother,” and slept by Nolan’s side at night. Five weeks after Nolan came home, they saw this little boy on the Hong Kong Waiting Children list and learned his name—Francis. They felt the Lord calling them once again, this time to bring Francis home.

People in their life wondered, was this decision wise? After all, Nolan had extensive needs—even more so than they first thought. After he was home, he had a grand mal seizure, the first of several, leading to many hospital stays and a diagnosis of a rare, progressive seizure disorder. Also, as much as their biological kids loved Nolan, they were just getting used to their newest family member. Should Troy and Jocelyn really shake things up again? And what about Francis’ needs? He had WAGR syndrome, a combination of disorders that caused tumors and affected his vision and mental development. Could they really care for his needs, too?

The Pipers didn’t hesitate. They had seen the ways God had provided with Nolan—from the way He enabled Nolan to somehow embrace them as parents from the very first day, to preventing Nolan’s seizures until he was home with access to excellent health care, to the way the Lord took away any fear of what it meant to raise a special needs child. They just knew. If God could do it once, He could do it again. As soon as Nolan’s adoption was finalized, they began the process to bring Francis home.

On February 8, 2018, Francis joined the Piper family, and two best friends officially became brothers. Francis loves to push Nolan in his wheelchair and help care for him. He rubs Nolan’s head when he’s sad and affectionately calls him “Noly.” The Piper family will never be the same, and that’s a great thing.

“Seeing the world through their eyes, it changes who you are and how you respond. Our boys find absolute joy in everything—a simple hug, a quick ‘I love you,’ a grab of the hand. We don’t look at them and think, ‘Wow, they have a lot of needs and are a lot of work.’ Because of them, we’re more patient,” said Jocelyn. “We’re quicker to show compassion. We love more deeply. The messy, sometimes chaotic, but always joyful life of a special needs parent is something I would never trade for anything.”

“Pray, and let God break your heart for what breaks His. I promise, God will equip you. You do not have to feel 100% ready or prepared. I actually don’t think you really can be, and that is where you will find the beauty in it all.”

Beauty in the midst of the mess. It’s kind of God’s specialty, isn’t it?

A baby abandoned in a roadside trash heap. A kindhearted boy who was family to him when neither of them had family. An imperfect, yet surrendered couple who answered God’s call with “Yes”—twice. And now? A still imperfect, yet joy-filled family that radiates God’s extraordinary love—the kind that enables us to love beyond the borders of comfort, disabilities, and countries. A love that knows no end.