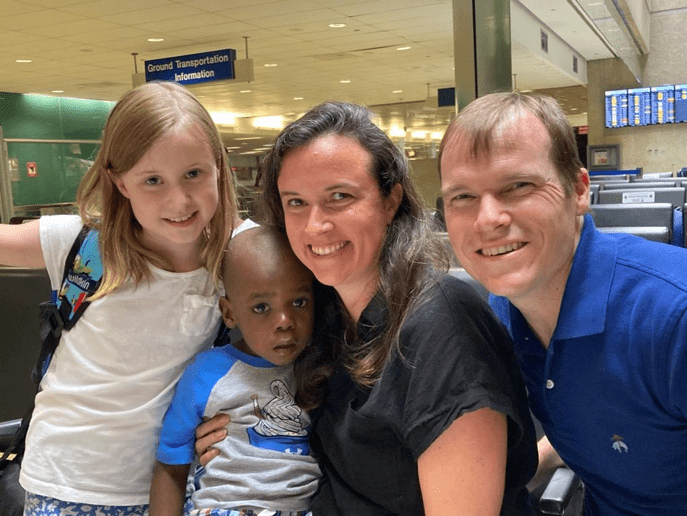 By Brooke Rowan and Jenny Riddle

In a time of collective struggling, hearing about the redemptive work of the Lord is hope to a weary soul. Although COVID-19 has created many challenges to the international adoption process for many families, the Lord has been faithfully working. Through Lifeline’s Haiti program, two families experienced inexpressible joy in getting to unite with their children in the middle of a pandemic. Their stories are examples of how the Lord is working to make all things work together for good and for His purposes. We pray they speak hope to your heart.

Scott and Susan Bryan began their adoption process in early 2013. Six years later, in June 2019, they received a referral from the Central Authority (IBESR) of Haiti for a sweet little boy named Garry. In early March 2020, their adoption was finalized in Haiti. However, the pandemic was creating travel challenges. By the end of July 2020, Garry’s visa was issued in order for him to travel to the U.S. to his family. But, how would God work the details out with travel restrictions and no flights in and out of the country?

Nick and Amy Oliver began their adoption process in mid-2016. In December 2018, they received a referral from IBESR for a sweet sibling set named Cefanette and Cefadson. In early February 2020, their adoption was finalized in Haiti. However, uncertainty began to loom over their process as the pandemic was taking hold of the world. By the end of July 2020, the siblings’ visas were issued in order for them to travel to the U.S. to their family. How would God work out the details for this family to be together?

The adoption process for the Bryan and Oliver families were starkly different overall, but they shared one thing in common: God’s sovereignty.

When the pandemic first began, both of the families were nearing the end of their process. They had just received their Adoption Decrees — the written court orders legally declaring the children their children. Both families were prepared for possible delays to their process because of the pandemic; however, each step of their process seemed to be met with miraculous swiftness and efficiency. By June 2020, it became evident that their children would soon be ready to travel, as their files were being prepared for entry into the U.S. Embassy’s Adoption Unit and Immigration Services division in Port-au-Prince, Haiti.

By July, a married couple was identified to serve as travel escorts for the three children: Johnny and Alison, who live in Haiti. Over the course of the month, the families, the escorts, and Lifeline’s Haiti Program Manager, Brooke Rowan, worked together to prepare for the children’s final travel home. The week of July 27, the children’s visas were issued and they were officially travel ready.

After obtaining final documentation from Haiti, the kids and their escorts were ready to travel to Fort Lauderdale. That day, August 1, was full of anticipation and excitement — and a hurricane that was making its way to the eastern part of Florida. However, God was faithful to oversee the details of that day just as He was over the details of their years-long process.

The children all met with Johnny and Alison, and they traveled to Port-au-Prince airport together. They made it swiftly through security and were ready to board the plane. Only a few short hours later, the children were walking through U.S. Customs and ready to be united with their parents. The meeting was a sweet one for both families and was a testament to God’s faithfulness and sovereignty over the adoption process. In the middle of a pandemic, and with the threat of a hurricane bearing down, God united these families in an amazing way. What a beautiful reminder of Hebrews 11:1 — “Now faith is being sure of what we hope for and certain of what we do not see.” The Bryan family with their daughter, Riley, and son, Garry, from Haiti.