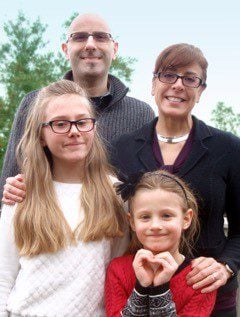 Steve and Heidi Fowler are a picture of resilience. Their story is one of unending faith in the sovereignty of God despite heartbreaking, ever-changing circumstances.

The Fowler’s had a heart for finding families for sibling groups—hearts that understand the difficulty that often surrounds finding a family who is called to adopt multiple children at once.  They knew that God had prepared their hearts and called them to begin the process of adoption.

They began to pursue the opportunity to adopt three sisters in Poland. They knew the process would be hard; they knew there would be obstacles; but they did not anticipate just how difficult their journey would be.

Steve and Heidi took multiple trips to Poland to visit the three girls they wanted to become their daughters. The Fowlers spent months at a time in and out of the country, opening their hearts to parent these girls. While in country, Steve and Heidi were away from their community, their church, their families, their jobs, and each trip brought new challenges.

Initially, the sisters wanted to be adopted. The Fowlers faced a difficult and lengthy court battle, but they wanted to give the girls the stability and love of a permanent family. The biggest hurdle came much later when the girls, who had once desired a forever family, began to express no interest in being adopted. Despite this change, the Fowlers remained committed to unconditionally loving these precious girls. Through much fervent prayer in the midst of these challenges, the Fowler’s made the extremely difficult decision to withdraw their petition and give the girls their desire—to remain in Poland in foster care instead of becoming a part of their family.

The Fowler’s were heartbroken, not knowing how to reconcile these events with the calling they knew the Lord had given them. Their social worker, Jana Lombardo, remembers this time as one that “could have turned them very bitter, but they were so gracious and kind throughout it all.”

At a time when they could have been angry and tried to find someone to blame, they sought to trust the Lord. But still, they hurt; they not only grieved the family they desired but also the hopeful future they longed for their girls to have.

Through means not of themselves, but of the Lord, they found the courage and strength to enter the fight again. Steve and Heidi moved forward in their calling once more in pursuit of another sibling group of two precious girls in Poland. They found themselves, once again, vulnerable, waiting in the roller coaster process of adopting the girls they hoped to be their daughters, resting in the Lord for His will to be done.

Again, they experienced challenges outside of their control. Because of a significant downsizing at Steve’s place of employment, he was let go. This loss created unforeseen financial considerations in a process of unknown length. To add to the complication, the Fowlers would need to travel to Poland for six weeks at any moment. Therefore, Steve began working part-time, but he would be delayed in finding new permanent employment. The Fowlers and Lifeline Staff chose a day to spend in intentional prayer for how to proceed, and for the Lord’s intervention in getting the approval they needed to travel. The next morning, our in-country staff called with news that their prayers had been answered. The Fowlers would likely travel to Poland at the end of the month!

The Fowlers know that there are roadblocks and challenges in adoption. But they also know that God is faithful with His presence and His strength. The paths that were closed to them created new doors through which they saw His faithfulness in new and exciting ways. In December 2016, the Fowlers came home with their two new daughters—a committed forever family. Soon after, Steve formally began his new, permanent job for which he interviewed over Skype while he was in Poland.

The Fowlers know firsthand that following God’s call can be costly, in many ways. It can take turns we could have never seen coming. It can lead to broken places and bonds. But they know God is faithful and good; He is never surprised. Resting in His sovereignty allows us to grab tightly to Him and His bigger purposes. Through their trials the Fowlers were able to forge new relationships, which God used to give them the strength to move forward toward His ultimate plan.

The darkest times are often the greatest opportunity for God’s light to shine. When she thinks about this family, Jana Lombardo continues raving about their resilience and the way God shines through them, “They are amazing, and I just love them to pieces!”

Is God calling you to be a light for Him to defend the fatherless? You can find out more about our adoption programs here.