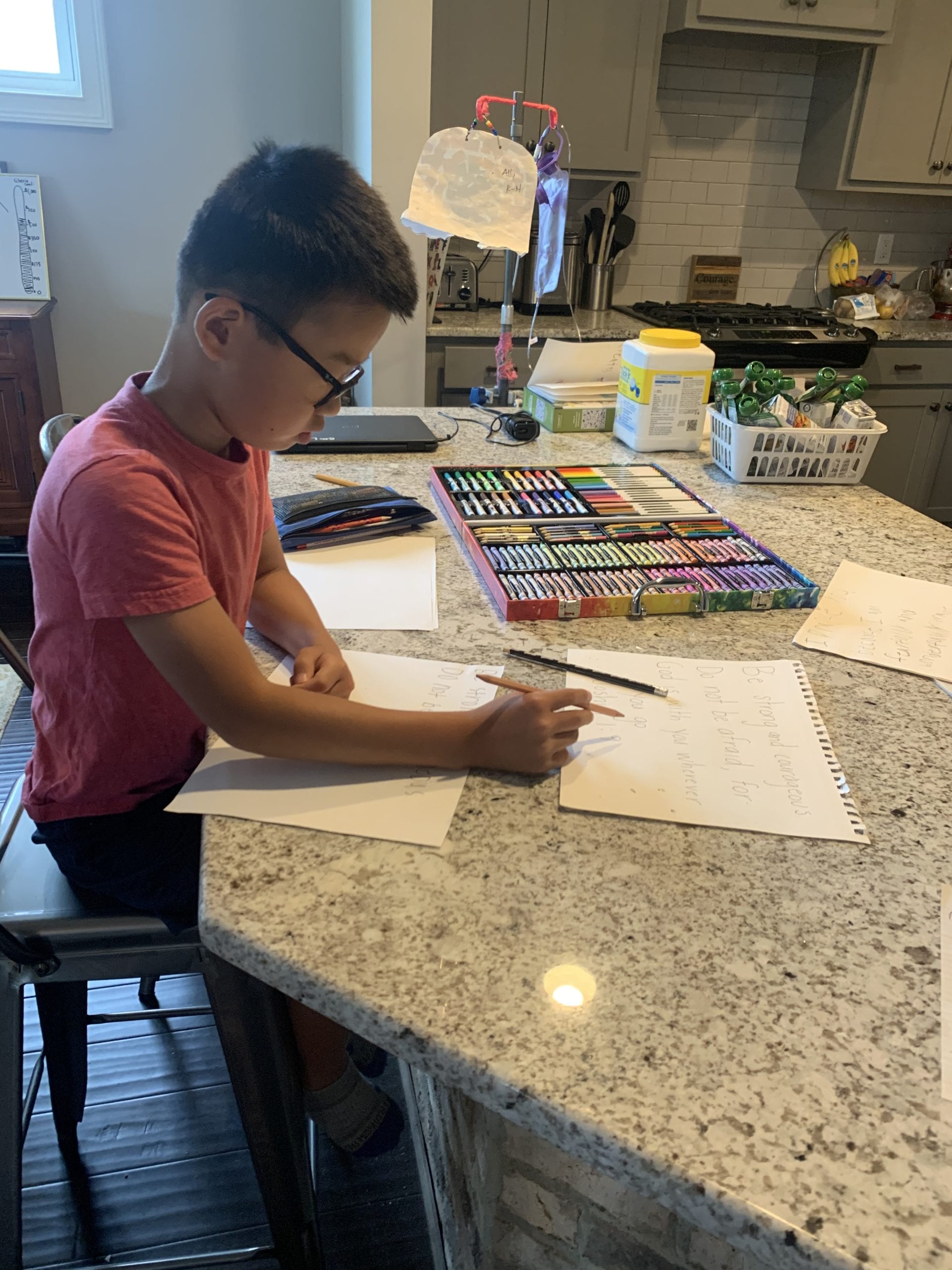 The Cheek family is one of many that has recently, and unexpectedly, opened its very own “private Christian school” while social distancing, as mom, Morgan, explained. Parents have dug down deep with creativity to fill the days with learning, fun, and for the Cheek family, the gospel. Morgan found Mission Kid on Lifeline Children’s Services’ website and began watching the videos with her son and daughter during “chapel.” But the impact Mission Kid made surprised even her.

“When thinking about what to do in chapel, I thought it would be cool to talk about people groups that were important to God,” Morgan said, who is mom to James, 8, Ally, 7, and twin sister who went to be with Jesus, Bailey Grace. “Because orphans are close to our home and our heart, we knew Lifeline would have some good resources.” She made chapel time very informal, she explained, had a short prayer time together and watched the daily videos that focus on the vulnerable in Liberia and (un)adopted® partner, REAP. The three would then go over the kid-friendly questions together and talk about what they learned.

James, who came home to Alabama from China in 2018, has always had a “soft heart for the homeless or those whose physical needs are not being met,” Morgan shared, noting how James was moved by seeing the orphans attend REAP’s life skills camp, Camp REAP. James said, “I wanted them to get the things they needed. I think the coolest thing about Camp REAP is that they teach the kids about God.”

“Our goal was to raise $350 to sponsor one kid,” Morgan said. “I posted it on a Monday and in less than a day we had raised well over our goal. We shot way too low on that.” The Cheeks, a Lifeline alumni family, ended up raising $1,000. They were able to sponsor two children for Camp REAP and support another friend ministering in Uganda.

Morgan shared how she was glad to set a goal and then see the Lord surpass it, as she felt it was showing James that God indeed cares about orphans.

“Just like everything, God was like, ‘$350? I own all the money in the world – you want to raise $350? I can do that in hours!’ It was really encouraging to me that when we do things in the name of Jesus, it doesn’t mean things will turn out exactly how we expect, but it does mean that He’s going to provide more abundantly than we can imagine.”

James said of the response, “I was surprised and didn’t know that after we shared the post the next day we started and people started sending money.” He said he felt “happy” that they could sponsor two children to send to Camp REAP.

For Morgan, who parents Ally with HECW2, a rare genetic disorder that affects the entire body, Mission Kid was a great option to get the whole family involved in something together. “Sometimes it can be tricky to find things fun for everybody. This was fun to do because it was nice to have something they could do as a team. … And Mission Kid is not hard, just look into it. I’m not a homeschooler, so if I can do it, anyone can do it.”

For other kids watching Mission Kid, James wanted to encourage them to get creative in finding ways to help. “I say you can do whatever you want and I bet others will like what you do” to raise money, he said.

For parents looking for ways to teach their children during this unique time, Morgan said Mission Kid was a great thing to use as a family. “At the end of each day, we all said our favorite thing to learn about that day was Camp REAP. I think I learned as much as James did!”

For more information and to sign up for free Mission Kid resources, visit lifelinechild.org/missionkid.